The Family From America

November 16, 2010
There has been an almost unforgivable amount of time since my last post, but I have excellent excuses. Firstly, I had an enormous number of assignments to finish last week, and then I was off to Portland, Oregon to visit my cousin Tammy, her husband Jeremy, and her two kids, Maya and Declan. Forgiven? Thanks.
I left for Portland on Thursday. My flight wasn’t until 12:45, but I left campus at 09:00 because I kept imagining a bus breakdown or that the SkyTrain would stop running for some reason. But I made it to YVR with 2.5 hours to spare. Luckily I hadn’t caught up on the latest episode of America’s Next Top Model so it was a morning well spent.
The plane I learned, once we boarded, was one of those tiny 30-seaters with one flight attendant and aren’t worthy of a walkway that’s indoors. We had to walk outside and up those tiny plane stairs to get on, an experience I equate with the cheap, questionable EasyJet flights in Europe. My seat mate was a slightly balding older gentleman with  German accent. He was polite and apologized for mistakenly taking my seatbelt. The flight is only an hour and fifteen minutes, so we just had time to take off and get our complimentary tomato juice before we landed again.
The weekend in Oregon was just lovely, there really is no other word that would adequately describe it. Tammy and Jeremy live in Newberg, which is about a half hour from Portland and an hour and a half from the coast. The city itself is the picture of suburban America, with vineyards in and around the whole city, walnut and hazelnut groves peppering the outskirts, and the requisite family-owned diners that have been around since the 1950s.
Jeremy had the day off on Friday, so we took a day trip to the coast. It was the perfect day - sunny and bright and not too cold. Maya, who is four years old and very determined, packed her suitcase for the beach with a book and her swimsuit. When we got to the beach, she wanted to take her shoes off and put her bathing suit on, but Tammy said that it might be a bit too cold to swim in the Pacific in mid-November. 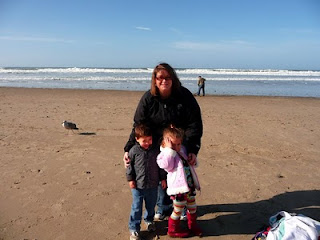 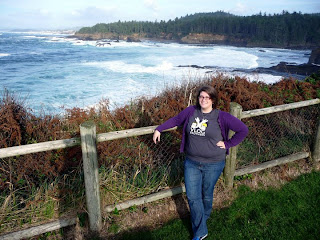 The Oregon coast is prettier than I imagined. Well, pretty is sort of an understatement. In the short 30 minutes that we drove along the coast, we went from beautiful sandy beaches with lots of rocks to climb, logs to sit on, and perfectly smooth sand to rugged, dangerous cliffs with enormous crashing waves. It was majestic. We stopped at Depoe Bay, where there is a dangerously low lookout, and got sprayed with sea water as the waves danced in the wind. It was amazing. We then stopped at another lookout called Boiler Bay. These cliffs had nothing on Cape Spear. Huge waves crashed against sharp, jagged rocks, while light blue water swirled underneath. Absolutely breathtaking, and definitely made me miss home. 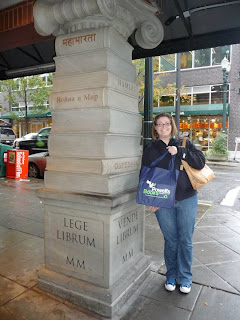 Tammy and I spent Saturday in Portland. My main desire was to go to Powell’s, the largest bookstore (shelf space, not floor space) in the entire world. I’m going to dedicate an entire entry to my experience there, but I’ll just say this: OMG. But Portland itself is a great city. Even though it was raining and I didn’t see much, I feel in love with it. There is a part of downtown Portland that has free access to the Streetcar. I mean, you have to love a city that lets you use public transport for free! The city is nestled along the Columbia river (from which the Columbia brand-name gets its name), and it’s just amazing. The walk along the river is beautiful - trees and gardens along the path, and a marina filled with boats and quaint docks. Above the river are layers of bridges and overpasses. It’s this astounding juxtaposition of nature and industrialism. I wonder what Wordsworth would have had to say about it?
Another thing about Oregon: the coffee is amazing. I don’t know why, seeing as Seattle is the birthplace of Starbucks and coffee isn’t locally grown (probably the only thing they don’t grow, actually), but every cup I had was made perfectly. If I were to choose my favourite city of everywhere I’ve visited based solely on coffee, Portland would be by far the winner. 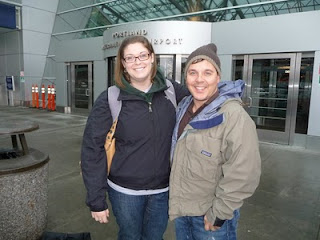 But as great as Portland is, and as good as my coffee was, and as happy as Powell's made me, the best part of the trip was spending time with my family. Tammy and I lived in the same city for a few years when we were much younger, and even though I thought she was super cool (I since know how wrong I am), we were never really close because we were too far apart in age. So it was a new experience to talk to her now as an adult, and to talk about our family and reminisce. It was also nice to get to know her husband, Jeremy. I met him briefly four years ago, but it was great to spend time challenging him to spelling games, learning about his work in the Navy, and just getting to know my cousin-in-law. (He’s wonderful, by the way. She made a good choice.) 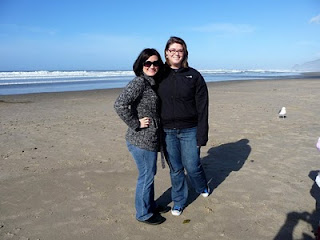 It was also great to spend time with my baby cousins. Kids are exhausting, but there is nothing that warms the heart more than when a little girl begs her dad to let you put her to bed and read a story. I had a lot of fun playing games with Maya and Declan. Maya taught me some cheerleading moves, and Declan finally let me fulfill my childhood dream of playing with dinkies - I didn’t have any because I was a girl so I had to play with barbies and knitting. And it was so nice to get all the hugs. Nothing feels as good as a kid hug.
The whole weekend was just great. It was exactly what I needed to feel refreshed and rejuvenated. Sometimes, in moments of selfishness and being clouded by negativity, I forget how great my family is. We’re definitely not a perfect bunch, and goodness we talk a lot, but they love and support me, and I love them for it. It’s important to be reminded of that every so often, I think. Or, rather, I know.
Jillz
PS - we went to this beach restaurant on Friday and Jeremy ordered fried oysters, and I ATE ONE! Or part of one. I mean, seriously big deal for me. It tasted like the ocean.

PPS - my camera broke 5 hours into the trip, so thanks for the pics, Tammy!

Kenmore said…
A good seatmate can make even the worst flight better. On my flight from Toronto to London an English gentleman sat next to me. He explained why the UK isn't part of the Euro, we both dissed the French for a bit, and then he went to sleep.
17/11/10 00:04

Tammy Williams said…
So Jeremy is wonderful and I am not cool? What's up with that? haha. I am so glad you were able to come visit the beautiful Oregon coast and our family. We don't get to see many extended relatives so it was the perfect treat! Declan woke up on Monday morning wondering where you were. "Where's Jillin?" he asked:)
17/11/10 00:33

Also: words cannot express my excitement about your seafood experience. Will you come to dinner with Jill and I and try more please?!
18/11/10 01:02