More than five years after the release of the seventh and final Harry Potter book (Harry Potter and the Deathly Hallows, if you've been living without access to cable / the internet / a newspaper), Rowling has finally released another book: The Casual Vacancy! And this one's definitely not for children. 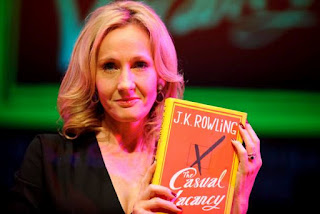 I purposely didn't read any reviews or even a plot summary of The Casual Vacancy before reading it. I didn't want to know anything about it, anything that might taint or distort my reading before I had even turned the title page. I wanted to have as pure of an experience as possible with the text. I wasn't sure if I should post a review so soon after its release (a week ago yesterday), in case others had the same feeling about it. So if you do: read no further! Stop here and go get The Casual Vacancy and read it and then come back and finish reading this post (because I do want you to read this post, I'll be honest with you.)
So, let's get to it, shall we?

The Casual Vacancy begins with the death of the middle-aged Barry Fairbrother, a pillar of the small fictional community of Pagford. Barry's death is unexpected and, as the news spreads in a ripple-effect, causes a great deal of uncertainty and sorrow to several townspeople.

As a member of the parish council, his seat is now empty and must be filled as soon as possible. Barry was the leader of the fight to allow the Fields, a low-income housing project built on Pagford land and home to a methadone clinic and drug treatment centre, to still have access to the schools and amenities of the town. The committee remained split on the issue, but with Barry gone, Howard Mollison - the enormously overweight and overbearing committee chair - is poised to end the battle and do away with the treatment centre once and for all.

However, the election for a new member of the council is not the focus of this book; rather, it acts as the vehicle through which the reader is given a free pass to see the private inner workings of the people of Pagford. We are able to act as the voyeur to the thoughts of teens struggling with love and sex, abusive parents, rape, and acts of self-injury. We see marriages desperately held together by delusion, mutual political interests, and religious obedience. Everyone in Pagford, it seems, is miserable, but afflicted with too much pride or fear to admit it.

It bears repeating: This is not a book written for young adults, nor would they perhaps even enjoy it. It's a heavy text - both literally (it's 500+ pages) and figuratively - there were moments when the subject matter made me cringe with its painful realism.

But I really loved it.

In true Rowling form, the book is dripping with description. But not the mundane description of something like Lord of the Rings (pages and pages detailing the colour of the trees)*; the sort of information that makes you feel as though you are sitting at the dinner table with the Mollisons, fully aware of the tension between every single person at the table, and there's nothing you can do about it. That, my friends, is good writing.

I also love stories where every character is connected in some way, and I love how Rowling has written the text. She seamlessly transitions between one character's thoughts into another's, so perfectly that several times I didn't realize it had happened. I've never read an omniscient 3rd person narrative like this before, and I think it's impeccably done. I became so wrapped up in a certain characters and storylines that I couldn't put the book down, for need to see how it was going to end for them.

I've read a few criticisms that Rowling writes the children superbly but falls short on the adults. I disagree with the latter half. I think the adults are realistic and relatable. I felt a particular affection for Tessa, a guidance counsellor with a neurotic husband, insufferable know-it-all son "Fats", and she is a recently diagnosed diabetic whose life is too stressful to worry about the affect of the chips on her midsection.

Perhaps my main criticism of The Casual Vacancy is that none of the characters are particularly likeable. In fact, I found myself disparing halfway through about the poor Pagfordians and their misery of living in a town where everyone has ulterior motives. It's not my reality, but maybe it's the reality for someone, and maybe that's the awful truth Rowling is trying to tell us.

I absolutely can't deny that my adoration of J.K. Rowling influenced my opinion of this book a bit. But I still think it's an interesting story and, for me, the style alone is enough to read it cover to cover. Either way, it's great to have her back.

Have you read it yet? What did you think? Are you going to read it? I'd love to hear your thoughts about it!

THANK YOU. I am always saying this about LOTR - people get so offended! But seriously, I couldn't read them, it was just *too* much description of crap that I really didn't care that much about. It got in the way of me liking the characters or even the story because the descriptions were too boring. Anyway, I also liked the LOTR movies. Cut out the boring 12 page discussion of trees, lol.

Anonymous said…
What an excellent review! PLEASE post this to Amazon.com - we need to counterbalance the fools who review it without reading it at all!
5/10/12 20:14