The NHL: A Love Story

October 18, 2010
Several cool and unexpected things happened to me this week: I sat next to a woman on the bus who turned out to be from Newfoundland and used to work with my aunt; I went to a super fancy (and delicious) free breakfast with my classmates and got to meet Canadian author/illustrator Pierre Pratt, who signed a book for me and was absolutely delightful; and I had to get my glasses fixed and I met a lovely optician and a friendly woman from New Brunswick who asked me to dog sit for her while she’s in the States. It was an alright weekend, all ‘round.

Most importantly, though, I saw my first NHL game yesterday: Canucks v. Hurricanes. You must all know by now that I am a self-proclaimed useless hockey fan. I would cheer for the Habs, but only because my Dad does. I know nothing about NHL players, except Sidney Crosby is a good player and he’s beautiful, and Wayne Gretzky is a super hero. People over the years have tried to teach me the rules of the game, the scoring, and about the players, but I haven’t been able to catch on.

But there’s something about having a “home team.” Living in a place where everyone supports the same team, because there’re the local heros and attending live games is much simpler than having to travel hundreds of kilometres to see an NHL game, makes hockey much more appealing. Also, Michelle has been bombarding me with information about particular players, strategies, and history. She’s chosen a “favourite” player for me, and for some reason, that makes a difference. 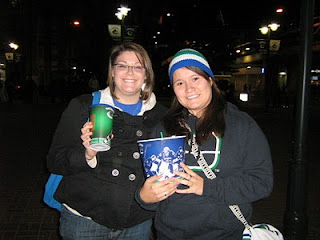 So seeing the Canucks game was freaking awesome. Seriously. We were sitting by friendly people, and the crowd was great. Plus, the Canucks played amazingly!! It was such a great game! And I found myself actually caring about what was happening. Michelle provided running commentary and I boo’d and cheered along with everyone else. I was hoarse from screaming by the end. When the Canucks scored their 5th goal, Michelle and I hugged! So much excitement! We also bought commemorative cups and a popcorn bucket, like real fans.

I think it’s safe to say that the Canucks game was probably my favourite BC adventure so far.

In other news, I’ve been reading Simon Kuper & Stefan Szymanski’s Soccernomics. It’s a pretty good read. It’s not a perfect book, and there are some obvious errors in both argument and writing, but I really like how it uses economics and statistics to explain fandom, transfers, and the history of why teams win. It’s also teaching me more about the Premier League and soccer history in general.

My favourite part of the book is the 2nd chapter, where they outline the cyclical nature of England’s belief about their national team and the World Cup. It’s hilarious and, if you’ve  ever followed The Guardian’s reporting on the national team, true.

Phase 1: Pretournament - certainty that England will win the World Cup.
Phase 2: During the tournament England meets a former war-time enemy.
Phase 3: The English conclude that the game turned on one freakish piece of bad luck that could only happen to them.
Phase 4: Moreover, everyone else cheated.
Phase 5: England is knocked out without getting anywhere near lifting the cup.
Phase 6: The day after elimination, normal life resumes.
Phase 7: A scapegoat is found.
Phase 8: England enters the next World Cup thinking it will win it.

What I realized last night was that these phases could also apply to Toronto Maple Leafs fans in relation to the Stanley Cup.

Phase 1: Regular season - certainty that the Leafs will win the Stanley Cup.
Phase 2: During the season, the Leafs meet an “enemy” team - normally the Habs.
Phase 3: The Leafs conclude that the game turned on one freakish piece of bad luck that could only happen to them.
Phase 4: Moreover, everyone else cheated.
Phase 5: The Leafs are knocked out before the playoffs without getting anywhere near lifting the Stanley Cup.
Phase 6: The day after elimination, normal life resumes.
Phase 7: A scapegoat is found.
Phase 8: the Leafs enter the next season thinking that, this year, they will win.

Anonymous said…
That's a good post! I'm glad because you maybe just might understand why hockey ROCKS! why: it's got speed, strategy, strength, individual creativity, teamwork, toughness, intelligence, and even elegance. I think no other sport has the combination of characteristics. One comment about the Leafs: the fans are such masochists to tolerate such poor performance without getting on the case of the management.
bye, love, Dad.
18/10/10 19:49

Anonymous said…
My favourite part of this post is the anonymous comment left by Poulie your Dad. I shall do the same.
Love,
Natalie
21/10/10 15:55

Unknown said…
THE LEAFS ARE THE BEST. They don't have to be good. I love them anyway. Leafs fans are the best fans out there in my opinion because we don't give up, and we DO think this year is going to be the year (every year) because we're optimists. Might not happen for another 40 years, but we're still hanging with them!
22/10/10 08:20