Showing posts from January, 2011
Show all

On the Edge of the World 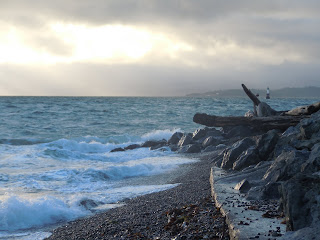 This past weekend I went to Victoria to visit my friend and classmate Thea. She has a condo right on the beach and I have four day weekends: a recipe for a perfect weekend, is it not? I went to Victoria twice last semester, and both times it rained for the entirety of my stay. This time, it was gross and grey on the ferry over on Thursday, but by noon on Friday the sun decided to give me a break and finally proved that it is beautiful in Victoria. My original reason for going to Victoria last weekend was an event being held at the University of Victoria on Thursday night. The Faculty of Education was showing the Canadian premier of the documentary Library of the Early Mind: A grown up look at children's literature . Thea and I were the only ones who made it to the showing from our MACL program, and I'm so glad we did. Filmmakers Edward J. Delaney and Steven Withrow interviewed children's book authors, illustrators, publishers, and librarians and asked questions about every
1 comment
Read more

A Catalogue, of Sorts

January 22, 2011
I 've been back in the ‘Couv for almost two weeks now, and I’ve been flat out pretty much since my plane landed! School this semester is already busy and demanding, and there’s so many people with whom to catch up about Christmas and New Years that I don’t have much time to dawdle around the internet - or, at least, as much as I had last semester. I’m taking three courses this semester. One is called New Media for Children and Young Adults. I decided to take it for several reasons: 1. I love YouTube, Twitter, Tumblr, blogs, and all those avenues for self-expression on the internet, 2. I was advised it would be a good course to take by my supervisor, and 3. I heard the prof was great. All of those things are still true, but it’s also bru-tal. I consider myself to be fairly adept at computers, at least in the sense that I learn quickly, but I feel slightly retarded in that class. It’s sort of boys v. girls class as well: the three guys are all uber tech savvy and bring their aluminu
1 comment
Read more

My Pride and Joy 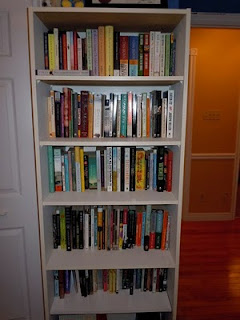 Fewer things bring me greater joy than turning the last page of a book and closing the back cover. I love the feeling of accomplishment I get holding a book and knowing that I’ve consumed that story, those words, a part of the author’s soul. I love feeling that I am different in some way because I have read that book - every time you read someone else’s thoughts, you are infusing your own with a piece of them. It’s a profound thought, really, to know that we are so intimately connected by the written word. Inspired by my friend Stacey’s completed 2010 resolution to read 50 books in a year, I thought I would count how many I read last year. The final count is somewhere around 40 (give or take one or two, because there are some that overlapped Christmases on both ends). I thought I would list them, if for no other reason than my own pleasure, and note the ones that I particularly enjoyed and think are worth reading, or the ones that are generally awful and should be avoided. (You'
3 comments
Read more

January 10, 2011
A belated happy 2011! My posting for the new year has been delayed, and if you’re the sort who really enjoys reading this blog (I’m not sure if that sort even exists), I am sorry for the wait! Over the Christmas season, I had a thoroughly lovely time at home, and I didn’t spend much extended time on my computer; thus, lack of posts. But I am back in The ‘Couv now, and the frequency of posts shall increase dramatically. I’ve said it before and I’ll say it again - right now, in fact: The best part about leaving home is returning back to it. I was back in Newfoundland for a month and it was time well spent. I definitely appreciated this Christmas more than I have others in recent memory, because every moment mattered. I saw almost all of my favourite people, met some lovely new friends, and rarely saw my bed before 3am. It was nice to sit on the couch and listen to Mom playing old hymns on her new accordion (and when I say nice, I really mean I tolerated it), watch Glee with the sister
276 comments
Read more
More posts