July 27, 2011
I roadtripped again this past weekend, back to Gander, with four fabulous friends: Jen, Laura W, Laura S, and Steph. We trekked across the island to visit Kayla. The girls haven't seen her in quite a while, and they wanted to see her new house and her new "hometown". 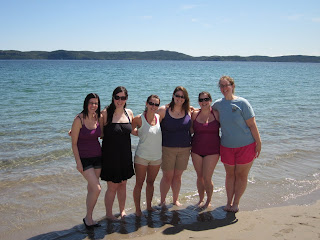 It was a perfectly lovely weekend, enhanced by the fact that the sun decided to make an extended appearance. We spent Saturday on a sandy beach in Eastport, tanning and numbing our feet in the Atlantic and climbing forbidden sand dunes... well, I climbed forbidden sand dunes. Everyone else looked on, lackadaisically telling me I shouldn't do it and taking incriminating pictures.

We then went to get ice cream at a Ma & Pop shop somewhere in Eastport. We were told that the ice cream was soft, but we ordered flavoured soft serve anyway. Everyone else had their orders and I, with much anticipation, awaited my grape cone. When it arrived, the woman handed it to me and it promptly fell off the cone and rolled down my entire shirt. Luckily I was wearing my Theodore Tugboat shirt, and the massive decal on the front repels stains impeccably well. 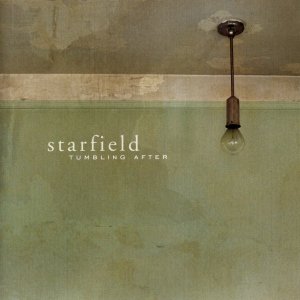 Also this past weekend, while rooting through Kayla's car for things she has stolen from me, I found my long-lost Starfield CD Tumbling After. This was quite fortunate, as I was about to spend $50 on a Starfield package which includes this CD out of desperation. Tumbling After is my favourite Starfield album, and it's their second record they released in Canada. It's not available on iTunes, because they re-recorded a lot of the songs and put on their first American album, Starfield.

I love Starfield because their songs so often reflect exactly what I'm thinking and feeling. One of my favourite songs, called "Hate the World Today", explains how even though sometimes we're angry and confused and we just want out of the life we're living, it doesn't mean we've lost hope or faith.

Looking for beauty
Searching for sense in all the pain
A note of redemption
A break in the clouds to stop the rain
Can You hear me calling?
Have You been listening to my cry?
Cause I can't carry on
If I don't find out why