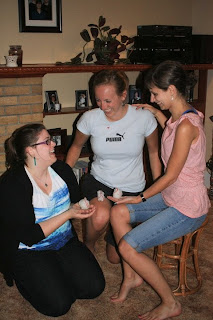 I've been meaning to write this post since last Monday, but work, family stuff, general merriment, and TV box sets have prevented me from doing so. But now, I write:

My dear friend Robyn, who lives in Corner Brook, is moving away this fall to teach in New Brunswick. This makes me simultaneously happy and sad, as many things seem to do lately; I'm happy she is pursuing her career, sad that it has to happen so far away from me.

In an attempt to have one last hurrah with Robz before she abandons this province, another dear friend, Wheels, and I road tripped across this great province to visit her. What resulted was one of the best weekends in recent memory, filled with new friends, excellent Tim Hortons sandwiches, alpacas and llamas, and, almost literally, endless laughter. 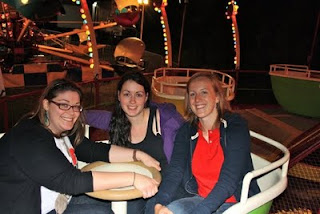 On Friday we stopped in Gander to see Kayla and Gavin. It turned out that Thomas Amusements was in town, so we, in the spirit of the pre-teens that we were when we last went to the fair, squealed in excitement as we waited in line for the Tilt-a-Whirl. Well, I screamed; Kayla tried to calm me and Wheels filmed it. We met Carnies and won stickers and Mardi Gras beads, then met up with Rocky, Grant, Jordan, and Jesse and shared bags of cotton candy. It was a magical night.

"What's this? Exploits River? This is like a cultural experience right now!" 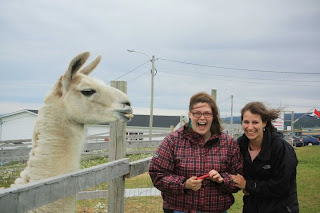 On Saturday Wheels and I left the Humby house and trekked to our final destination: Corner Brook. We made it relatively unscathed, except I was fairly concerned for Wheels' sanity towards the end - when she gets hungry, look out!

When we finally met up with Robz, it was off to the alpaca farm in Felix Cove immediately! Even though we drove half an hour in the wrong direction, we made it there by our original set time. 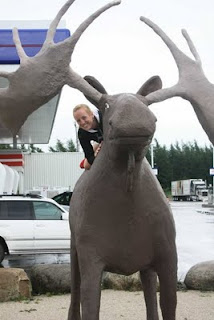 We loved the alpacas and the llamas. They were a time. We also each bought miniature alpacas, which Robz, Wheels, and I named Bumblebee, Razoolies, and Scarlet, respectively. Robz's mom even took family photos of us, the sweetest thing!

We had planned to do a hike on Sunday, but true to Newfoundland form, it was raining. So instead we headed to the Insectarium with Robyn's friends Leanne and Tom. Even though I hate bugs, we had a great time trying to get butterflies to land on Wheels and squinting to find the queen bee in the glass honeycomb. Supper was had at the Big Stop in Deer Lake, naturally, after which Wheels (illegally) climbed the Moose and broke one of the antlers. We also met Adam, a young man who was biking from Vancouver to St. John's. We hoisted him up onto the moose, too. So much illegal-ness in one day!

"I didn't like The Moffatts. I was like, Hanson already did this. The Moffatts are the poor man's Hanson." 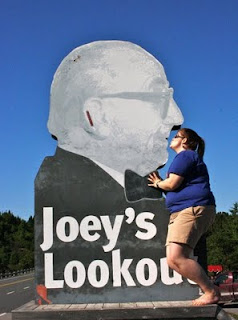 We, tragically, had to leave on Monday to head back to real life. After a sad goodbye to Robz, Wheels and I set out for the long drive home. We made the most of the beautiful day across the island, though. We stopped into the Mary March museum in Grand Falls, after getting lost in the ghetto of Windsor. (The museum only cost $2.50 admission, which tells you how good it is.) After a brief visit to Kayla, we stopped to cross an item off my life-list: kiss Joey Smallwood's head at Joey's Lookout in Gambo! It was such a special moment! Then we had a picnic just outside of Clarenville, doing lunges and cartwheels to stretch out the car-legs, before continuing on to the capital city.

"Ahh, a breakup. That usually brings out the scripture."

** All pictures in this post are taken (stolen?) from Robz and Wheels.
friendship thoughts on life travel

OzzyMan said…
This post made me really happy and sad all at the same time.
Happy 'cause you had fun, and sad 'cause Robz is leaving and I didn't get a part of this epic adventure. haha
9/8/11 13:34

Anonymous said…
I lovelovelove this and lovelovelove you and seriously had the best weekend. A memorable one indeed, and one that rightfully celebrated our awesome friendship! <3
11/8/11 07:58