"Terse and Tasty": The Summer That Ended Up Not Sucking

September 11, 2011
My absence from this blog over the past month is inexcusable, but I will make excuses anyway. Many milestones have occurred in a short period of time, and I've got a lot of blog posts just waiting to make their debut on the internet. However, this particular entry will be dedicated solely to the fact that this summer, which started out pretty bleak, ended up not sucking. On the contrary: it rocked out towards the end.

The weather in St. John's was complete garbage for pretty much all of June and July, which explains partly why I was in this weird depressed funk for a while. I find that when I get sad, suddenly everything that makes me unhappy, both past and present, come rushing to the fore and I get bummed out to the nth degree. So I was pretty grumpy for the first two-thirds of the summer.

Then something magical happened: road trips.

I darted out to Gander several times, which I've already mention in a blog post, and then hit up the west coast, which you can read about here. At the end of August, my amazing friend Thea came to visit all the way from Victoria, BC. Thea and I met on the first day of school last September at UBC, and we became "bosom buddies" almost instantly. Because I was essentially homeless and an orphan in BC, Thea opened her home and her family to me as often as I liked, and she helped me find a life on the other side of the country. So when Thea decided to pay me a visit in my hometown, I was more than excited to show her my life and my friends, to repay the favour. 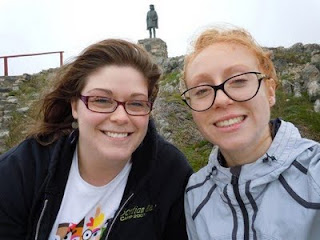 We spent a few days in St. John's doing touristy things like hiking Signal Hill, taking pictures at Cape Spear, eating ice cream at Moo-Moos and visiting the Geo Centre. We also saw the movie Glee in 3D, which was an all-around disappointment.

Then Thea and I took off on another road trip! The weather was uncharacteristically phenomenal, so we took in as much of the province as we could. We drove to Bonavista, then to Gander to stay with Kayla and Gavin for the night, then onto Twillingate and then to Corner Brook, with a stop into Springdale, too. Finally we ended up in Stephenville for Danika and Daniel's wedding, and took a dart to Felix Cove to visit the alpacas again.

The trip was fantastic for so many reasons. First, Thea is a great travel buddy. She is easy to get along with and was ok with doing everything I suggested. Second: I realized how much I love this province. It is so beautiful and unique and ancient. There is so much history here. Everyone is connected and people are, in general, friendly and helpful by nature. Third: I love that my friends are now friends. I'm glad that such an important person from my west coast life is now a part of my east coast life. I love that my worlds are colliding.

So now that I've finally broke back into blogging, I'm going to try and post at least once a week, if not more. I'm going to be writing reviews of children's books for CM magazine, so I will post those once they are published.

Welcome back, I suppose, and here's to a fall of continuous blogging!