Because Jian Told Me To

November 15, 2011
It's no secret that I love the CBC Radio show "Q" - for both its content and its host, Jian Ghomeshi. I've found that I am inclined to buy or read or subscribe to or follow any musician, author, columnist, and actor he interviews. This is particularly true of books, and I have read two books in the past week or so that I would have passed by, were it not for Jian. I thought I would review them, since I haven't done a book review in a while. 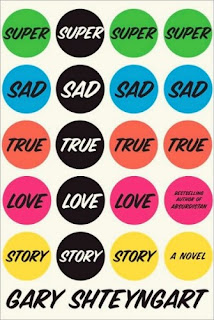 A few weeks ago, Jian re-aired an interview he did this past summer with author Shteyngart. I was only half listening at first, but then I started hearing some pretty solid jokes, and paid closer attention. Steyngart was witty, clever, and quite interesting to listen to, so I decided to pick up his book as soon as possible.

I had seen Super Sad True Love Story around for a few months, and almost picked it up when I was in Portland last November, based solely on the eye-catching cover and the traumatic title. Once I learned that it was a present-day dystopian novel, I had to have it for my collection.

The plot seems simple at first, but actually becomes this complicated tightly-woven web of thoughts that, in my opinion, derails about half of the way through. The protagonist, Lenny Abramov, is an almost-40-year-old with grey hair, a protruding belly, and blemished skin. In a world where the value of the American dollar has diminished and Asian countries have taken over, people value youthfulness and physical attractiveness more highly than any other attribute - other than personal credit rating - and using hand-held computers called äppärät to rate strangers on their bed-worthiness. Ironically, Lenny works for a company trying to reverse the ageing process, and while in Rome looking for test subjects, he falls madly in love with a beautiful young Korean-American named Eunice. Eunice is charming at first, but when she returns to New York to give her relationship with Lenny a chance, it becomes increasingly evident that she carries an unreal amount of emotional baggage. While she struggles to deal with her duty to her family as the eldest child, Lenny struggles at work and with his own family situation, and he clings to the past (his collection of real books, clothing) in a way that alienates him from society. Oh, and there is a massive protest and revolt happening in NYC at the same time.

See what I mean by complicated?

I like the way this book is structured. Each chapter alternates between a first-person narrative from Lenny's personal journal and emails that Eunice sends to her mother, sister, and best friend. I preferred Eunice's chapters because they were less wordy and revealed a lot more about Eunice than Lenny's journal entries.

However, I have three massive problems with this book: 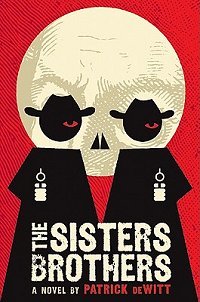 Never before had I paid any attention to the Giller Prize nominees or even knew how prestigious a prize it is. When I learned that Jian was hosting, I looked up the nominated books; Patrick deWitt's The Sisters Brothers was the novel that stood out as the most interesting to me. I also started hearing a lot about this particular book around - friends who worked at Chapters recommended it, Anthony Germain talked about it on the CBC Morning Show, I'd seen articles floating around the internet about it. So, I bought it and started reading it before the Giller Prize was announced. It didn't win, but it is still an amazing book that I quickly flew through in a few hours, not wanting to put it down for a break.

The Sisters brothers are Eli and Charlie Sisters; trained assassins living in Oregon during the California gold rush. The novel opens, narrated by the younger and fatter Eli, just as the brothers are heading to California to murder Herman Kermit Warm, a man who is known only to them as "a thief." Eli's horse is a relatively useless chubby and slow creature named Tub who is completely impractical for his line of work. The book covers the adventures and people met by the brothers on their way to California, revealing Charlie to be a heavy drinker and Eli a sort of romantic at heart. When the brothers arrive in San Francisco, they learn that their contact and  their target have gone missing - together. Questioning everything he had believed in, and with a fat horse who has lost an eye, Eli reluctantly joins Charlie to find Warm on this last, unexpected leg of their journey.

I absolutely loved this book. From the minute I picked it up to the moment I put it down, I didn't want to stop reading. What is most appealing about The Sisters Brothers, first and foremost, is deWitt's writing style. It's written without contractions and nuances of English in 2011, and as such is a straightforward, clear narrative. That isn't to say that there aren't any moments of beautiful writing - there are. Many, in fact. But this is a novel that is definitely more centred on telling a story than presenting an author's philosophy or dazzling with words. It's funny, suspenseful, and I was filled with a nostalgia for a past that is not my own.

My final verdict:
Read this book! Stop what you're doing, and go out and buy it right now! Borrow my copy! Go to your library! Get it on your eReader/iPad/iPhone! It's an excellent addition to your library and most certainly deserved to be nominated for the Giller Prize.