So, in an effort to feel homey and warm and comfortable, I decided that this evening I was going to cook. I love cooking and my evenings don't really let me do the kind of cooking that takes rows and rows of spices, lots of chopping, and dirtying every pot and pan in the cupboard. I decided that tonight would be one of those nights where I would make something healthy, delicious, and from scratch. I had bought some quinoa, which I have never made before, had some fresh veggies in the fridge, and took some ground beef out of the freezer: it was meatball night.

I also decided that I was going to write a blog today. My original plan was to write about something quite serious, but then I thought: I've never posted a blog about cooking, even though I love it. So I cranked Michael Buble's Christmas album, put on my sweatpants, pulled my hair into a ponytail, and we were off to the races. Thus I present to you: Meatballs & Quinoa - A Beautiful Pair.

I decided I wasn't going to use a recipe for my meatballs. I relied totally on my memories of watching my mom and aunts make them, as well as my countless hours watching The Food Network. The following ingredients made the cut (because they were what I bought/thought would taste good/had on hand). 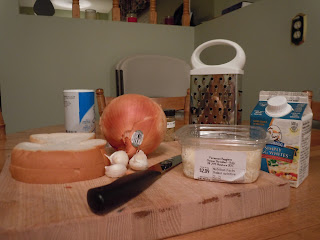 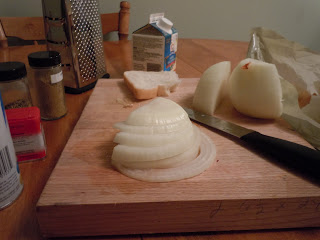 I use onions a lot. In just about every meal I cook, whether its pasta or stirfry or a sandwich, I use onions. So I chop a lot of onions. But for some reason today, these onions made me cry like 30 Rock had been cancelled. My mascara was running down my face and I couldn't see anything. But I soldiered on, and chopped up the remaining ingredients. 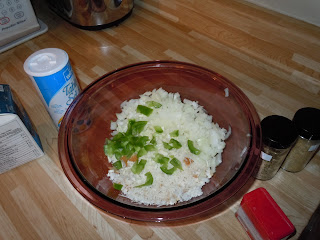 Then I added the meat and spices (I used three different kinds of pepper because I like the light taste of white pepper, lemon pepper adds an extra kick, and cracked black pepper gives a bit of heat) and mixed it all up, and it looked like this: 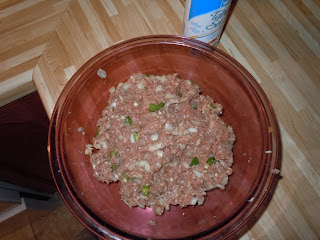 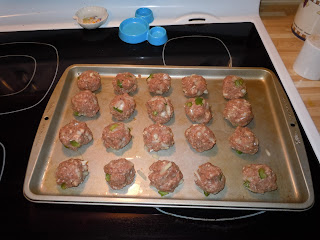 All that was left was to form the balls out of the meat - thus making the meatballs. I also coated the bottom of the pan in olive oil, which I wasn't enturely sure was the right move. I knew Jamie Oliver would approve, because he douses every single thing he makes - even Jiggs Dinner - in oil. So with that comforting thought, I placed the tray in the oven for 20 mins on 375 degrees. 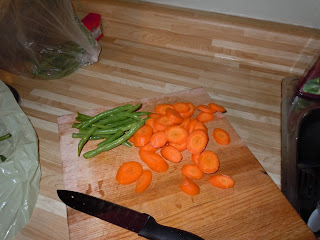 While the meat cooked and the quinoa simmered away (2 parts water to 1 part quinoa; salt and boil the water, toss in the grain, and simmer on medium heat for 15 mins or until the water is gone), I chopped some carrots and green beans and tossed them in a pot of simmering water to steam.

Then I washed dishes. 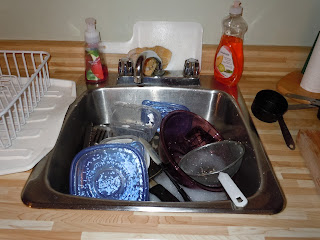 Then my supper was FINALLY finished after an hour and a half of prep work, and I was so hungry and happy that I enjoyed it all the more. And I have enough deliciousness for another meal, and I have two more meals of meatballs stored in my freezer for a later date. 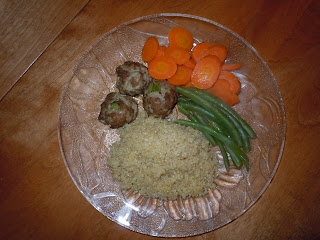 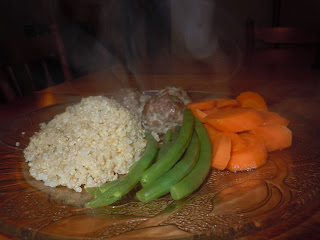 Still so hot and fresh you can see the steam!

Anyway, now I am sipping on some pomegranate tea, half-watching 30 Rock and feeling full, peaceful, and content. I must head off to the gym later, but for now I can pretend I don't have to.

Moulie said…
First of all - you have Michael Buble's Christmas CD??

Secondly, I tasted quinoa for the first time - it looked like little woolies first, so I was hesitant to try it, but I did, and it was good. Your meatballs were tasty as well. I personally like a little BBQ sauce (or sweet & sour)on meatballs, but naked meatballs are good too.