No. Not that. Try again.

I am the kind of person who always thinks the book is better than the film adaptation of it. I temporarily reneged that belief when I fell in love with the 2005 Keira Knightley version of Pride and Prejudice - Mr. Darcy's hand flex after helping Elizabeth into the carriage! The argument in the rain! Donald Sutherland and Mr. Bingley! Ribbons! Yes, I love everything about that film, and I felt it captured sort of a more ... repressed passion than the book. But then I re-read the book and I decided I have to love them equally. 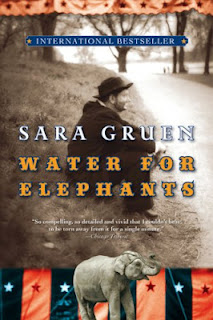 A few weeks ago I read Sara Gruen's Water for Elephants. The first I had heard of this book was when the movie came out last year and the book was suddenly on every front table and display shelf in bookstores across the country. I immediately wrote it off because 1: Robert Pattinson (I can't forgive him for going Cedric Diggory to Edward Cullen. Traitor.) and 2: the movie poster was so vague that I could not see the connection between the title and the mis-matched Robert and Reese cuddling while a Peeping Tom looked on.

Having completely forgotten about both the book and the movie, there was a sale at Chapters the other day and this book caught my eye. Naturally, I picked it up and hastened home to read it. I was almost immediately taken into the story, which begins with a first person narration from the 90-something year-old protagonist, Jacob Jankowski, who reflects on his life in the circus. The book alternates between his life in the assisted living facility where his children have placed him and flashbacks to his first year working with Benzini Brothers Most Spectacular Show On Earth.

Jacob has the folkloric experience of running away to join the circus, except he's running away from an Ivy League education as a veterinarian and the recent death of his beloved parents. On a whim he jumps a train and finds himself among circus workers and performers. Through a series of fortunate encounters, he befriends August, the temperamental animal trainer and husband to Marlena, the beautiful and graceful lead act. When the struggling circus acquires an elephant - the ringmaster Uncle Al's dream - August is violent and angry at the animal's disobedience and he becomes increasingly unhinged.

Meanwhile, Jacob has made a few other friends in the circus, including Marlena. The two dance around unspoken feelings for a long time, until Marlena opens up to Jacob about her life with August. The two are torn on how to approach their feelings, until an event with the elephant completely changes their lives.

I loved this book. It was one of those that, after putting it down to go to work or an appointment or other such life requirements, I couldn't wait to pick up again. It's certainly not the most original story, nor is it the most sublimely written, but it's a good narrative that is compelling both in setting and characters. I think I most enjoyed reading about the process of trekking a circus across the United States by train, and the caring for animals and people alike in the depression-era in a circus. It is definitely worth the read.

And So: I Saw The Movie 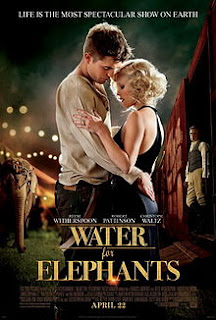 After reading the book, I thought that seeing the film might help me visualize some of the more foreign settings described in the book - primarily Jacob's living quarters: in a makeshift room of a car shared with horses and a dwarf. I'd avoided the movie Water for Elephants mainly (read: entirely) because of Robert Pattinson, but I thought I'd give it a go.

While the movie hits on most of the key plot points, it also changes a great deal. The most noteworthy, at least for me, was that Uncle Al is completely written out of the script, and August runs the circus. I felt that his absence left a pretty gaping hole in the narrative. The pace of the film is also quite quick, which doesn't really give much room for developing the relationships between any and all characters. Let's take Jacob and his roommate Walter as an example. Their relationship is rocky from the beginning - they are equally unhappy to be sharing such cramped living quarters. However, their friendship is established by a slow series of events, building trust and loyalty throughout the entire book. There isn't even a hint of this layered connection in the movie, which is a crying shame, really.

Perhaps the biggest problem with the film, though, is that I am completely unconvinced that Jacob and Marlena even like each other. There is zero chemistry. There are no secret glances, no exchanged giggles, no meaningful conversations. It's a disaster of a casting decision, is what it is. And when you're not convinced that your lead love interests are even interested in each other, how can the audience engage with the story whatsoever?

And so I return to my original thesis of this post: the book is always, always better than the movie.