Book Review Series: Is Everyone Hanging Out Without Me? (And Other Concerns) by Mindy Kaling

July 16, 2012
It's been far too long since I've done a book review post. Right now I'm re-reading the Harry Potter series (because I miss him!), but I've read a few other books of varying quality and genre over the past few months and I thought it was time to talk about them.

This summer I've been drawn to biographies, and autobiographies of comedians in particular. It seems like it's a thing now for comics, comedic actors, and comedy writers to put out a memoir before they reach the age of 40, and there's been a mass production of personal recollections released in the past year or two. I've read 6 or 7 of these in the past year, and I thought I'd do a mini-series on comedians autobiographies - the good, the bad, and the unfunny. (I've already written a review of Ellen Degeneres' book Seriously...I'm Kidding. Spoiler alert: it's not good.)

I'll begin with one of the best: 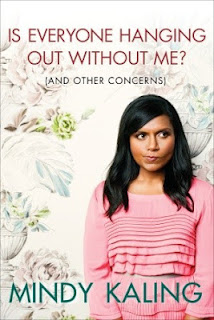 Is Everyone Hanging Out Without Me? (And Other Concerns) by Mindy Kaling

For those who are not frequent viewers of The Office, or just don't pay attention to the credits on TV shows, Mindy Kaling is a writer, actor, and occasional director for the American version of The Office. She plays the ditzy and, quite frankly, crazy Kelly Kapur on the show. And she is hilarious.

To be honest, when I was heavily into The Office, I sort of hated Kelly. She's annoying and shallow and didn't have great storylines. Naturally, by extension, I didn't like Mindy, as I assumed she must be an airhead also. Everyone, please take note: I WAS WRONG. I didn't realize at first that Mindy was a writer, and when I started reading a bit about her and following her on Twitter, I found myself thinking she was quite funny and smart.

I bought Is Everyone Hanging Out Without Me? (And Other Concerns) on a sort of impulse purchase (as so many of my book/everything purchases are) and I do not regret it. In fact, I am so glad I picked it up. Is Everyone Hanging Out Without Me? is one of the funniest autobiographies books I have read ever. She talks about her childhood, her struggles with weight, going to college, lasting friendships, the process of becoming a writer, and the ups and downs in confidence that come with working in television.

I liked Mindy's book so much, I think, because she had a very normal life. It seems like so many comedians had rough childhoods with absentee parents and exposure to awful events at too young an age. Mindy wasn't abused or bullied (very much). She likes her parents and her family, she kept her head down and did well in school, she had some great friends who she lived with and wrote with and fought with. She went to collage, graduated, and then began pursuing her dream of writing and acting. She was a kid who obsessed over comedy on TV and in movies, would act out Monty Python and SNL sketches as a teen, and found comedy in every situation. She doesn't make comedy glamourous; it's a part of every day life.

What I liked the most about Mindy's book is that her love of comedy is pure. It isn't escapism or retaliation. She's just really, really funny. I laughed out loud so often in her book, underlined hilarious paragraphs and texted funny sentences to people. She's someone that's probably as funny sitting down over a cup of coffee as she is in the writing room.

I highly recommend Is Everyone Hanging Out Without Me? (And Other Concerns). I finished reading it and I thought: I could do that. I could write comedy like Mindy. That's what this book does. It makes humour accessible to everyone, and shows that you don't have to be some extraordinary or lucky person to "get discovered"; you need to work hard, laugh a lot, and be funny. And it makes you laugh a lot.
_________________