Showing posts from August, 2012
Show all

August 21, 2012
I hate packing. Case and point: I am sitting in Starbucks sipping a $2.09 coffee while two new suitcases lie at home, sprawled open on the bed and floor of my bedroom. The wrapping is still on the handles and there are reminders that they once lived at Sears still in the bottom of the case, yet there are purses and hats and accessories and one hoodie thrown carelessly into them. I spent three days deciding what DVDs and TV box sets I was going to bring in my travel CD case, and took another four to put the empty cases back on the shelf. There is a large box with a blanket in the bottom sitting on the floor of my living room, next to which is my jewelry box and iPod dock station ready to be wrapped in the packing foam that is currently acting as a rug for my cat. I am leaving for Ottawa (henceforth referred to as "The Capital" as an homage to The Hunger Games because I am a neeeerd ) in 8 days! That is soon. I realized how soon it was when my parents came into my room as
2 comments
Read more

Lights Will Guide You Home 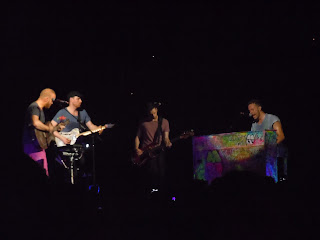 When I first met my best bud Wheels (birth name: Melissa Wheeler ) 10 years ago, I quickly learned two things about her: she liked basketball and her favourite band was Coldplay. I was not a fan of either of those things, so we saw each other at birthday parties and city-wide youth group events, and that was pretty much it. Also I was a year older, so I was too cool and mature to befriend a youngster like Wheels. However, at one fateful birthday party, I remember that someone gave Wheels a homemade birthday card that used Coldplay lyrics to compose a birthday greeting. I remember being impressed that someone took the time to do that, but also feeling that I would really like these Coldplay fellows if I gave them a chance. Shortly after, I bought their first two albums and listened, as is my standard practice, on repeat. I didn't fall in love with Chris Martin & co. until the summer of 2005, however, when they released their third album X&Y . I had just graduated hig
1 comment
Read more
More posts