Book Review Series: It's Not Me, It's You by Jon Richardson

September 13, 2012
Remember when this used to be a blog about books?

Remember when I started a series about comedians's autobiographies?

Well, I do (vaguely). And I think I'll revisit that series today and write about Jon Richardson's book It's Not Me, It's You: Impossible Perfectionist Seeks Very Very Very Tidy Woman. 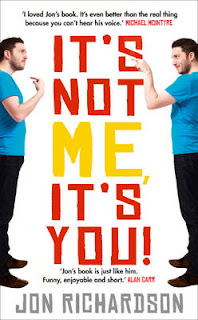 A little bit of background for those who have never heard of Jon Richardson or are unfamiliar with his work and comedy style: Jon is one of the team captains on my favourite TV show 8 Out of 10 Cats, a British comedy panel show. Jon's "thing" (his "schtick," if you will) is that he's single and has been for quite some time (8 years as of August 2011), and that no other human could be perfect enough for him. It provokes laughs on comedy panel shows and in his stand-up routine, but reading 200-odd pages of it gets pretty old pretty quickly.

It's Not Me, It's You was written as a continuation from a Valentine's Day submission to The Guardian online newspaper (which you can read here). I read the article and thought it was funny and poignant and made me sort of want to take Jon into my arms and hug the weird, obsessive loneliness away. So when I heard he turned the article into the intro for a book, I immediately bought it and prepared for a light read, lots of chuckles and knowing sighs punctuated by moments of true insight and philosophical wisdom.

You can tell by my obvious framing of the last paragraph where this is going: the book didn't live up to my expectations. It's set up as a sort of daily journey through Jon's life, following in minute detail how he makes a cup of tea or portions out his meal or exercises. It carries on in excruciating detail sometimes, and Jon delineates why exactly performing a task in his way is right and every other way is wrong. From these scenarios he extracts why he is single and why being alone is better, because if a relationship cannot end well (which it won't because no one is perfect) then why bother starting in the beginning? To be honest: it's exhausting.

The book wasn't all doom and gloom, though. I definitely laughed, just not nearly as much as I expected to. He had some gems of wisdom hidden throughout as well. It wasn't what I anticipated from this great comedian, but also, in retrospect, didn't surprise me.

It's Not Me, It's You is by no means a failure, but I'm not really sure it's a triumph either. I think Jon's humour is best consumed on 8 Out of 10 Cats where his adorable smile and nervous giggle make his resounding pessimism sort of adorable.

Anonymous said…
I always appreciate a great article or piece of writing. Thanks for the contribution.
16/9/12 11:18