Luckily, this massive break in writing has given me lots of time for reading, which in turn gives me reason for writing, so I guess I've rendered my previous sentence moot.

As you know, I have a certain penchant for comedian/writer autobiographies. Sometimes they are terrible (like Ellen Degeneres's Seriously...I'm Kidding); sometimes they are pretty good (like Jon Richardson's It's Not Me, It's You); but rarely are they ever fantastic. Which is why I deeply, unapologetically, and wholeheartedly loved every word of David Mitchell's Back Story. 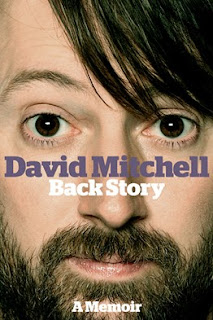 I've written about David Mitchell (not the fiction author, the other one) before, crediting him as a major influence on my writing style, so I suppose it's no surprise that I enjoyed his book to the full. It was released in October 2012, but I had read a slew of British comedians's autobiographies at the time, all of which were ho-hum, and it was a mixture of exhaustion of the genre and fear that it would be boring that I didn't read Back Story right away.

But oh! how my fears were all for nought!

The first thing I love about Back Story is the title. Obviously, as an autobiography, it's the "backstory" to his life. However, the narrative is framed through a walk around his neighbourhood - a route he began taking when he started walking to cure his bad back; ergo, the story of his back. It's such a simple double entendre, but so typically Mitchell in its clever- and straightforward-ness.

Back Story follows the conventions of other memoirs - we begin at the beginning of his life and end at present day - but what makes this memoir so noteworthy is the way he tells his story. It isn't a mere recounting of events as he remembers, accompanied by weak commentary (a la James Corden's simultaneously drab and undeservedly arrogant May I Have Your Attention, Please?). Mitchell illustrates his child self as almost a miniature replica of his posh, proper, and affectionately curmudgeonly adult self, which is absolutely hilarious. Mitchell has established his public persona as someone who enjoys order and rules, and in his memoir he presents the origins for this behaviour. There's something outrageously funny about knowing that adult David, who has a distinct dislike for lobster, had the same sentiments as a child:


But lobsters definitely look evil. And, while I admit that I have never met one under conditions likely to bring out the best in a crustacean, I have yet to see evidence of their goodwill. It is human nature to be repelled by such creatures - just as it is human nature to think, quite wrongly, that it might be a good idea to cuddle a lion cub. As a four-year-old, I was even more hardline about this than I am now.

Obviously, hilarious opinions aside, Mitchell is an incredible writer. Because one of the main investments of my time is British comedy and television, what I particularly enjoyed about this book is Mitchell's journey through working as a TV and radio comedy writer. He paints the picture of the job as neither glamourous nor drudgery, neither stressful nor carefree. It is, as he explains through his typically practical worldview, a decent job and a nice way to earn a living. What's important is that he notes the sheer amount of time he spent writing throughout his life - from a child writing a sprawling, endless (and pointless) fantastical drama with knights and wizards and dragons, to his days at Cambridge writing sketches and plays and not writing essays. It is clear that his writing is a skill he has honed over decades of hard - and enjoyable - work.

I feel like David Mitchell is still a bit of an unknown to many people in Canada, so here are links to his column at The Guardian, his video rants called David Mitchell's Soapbox, and his TV show Would I Lie To You. If you like him on the internet, I can guarantee you will like his book. And should therefore read it. Immediately.